Suitless is identical in every category in which it appears, outside of Map Completion categories. It is all about platforming and alarm manipulation.

The pirate alarm runs on a ~8-second timer; if a pirate sees you and then stops seeing you, the alarm will stay on for 8 seconds. If it spots you again, it's another 8 seconds from that point. 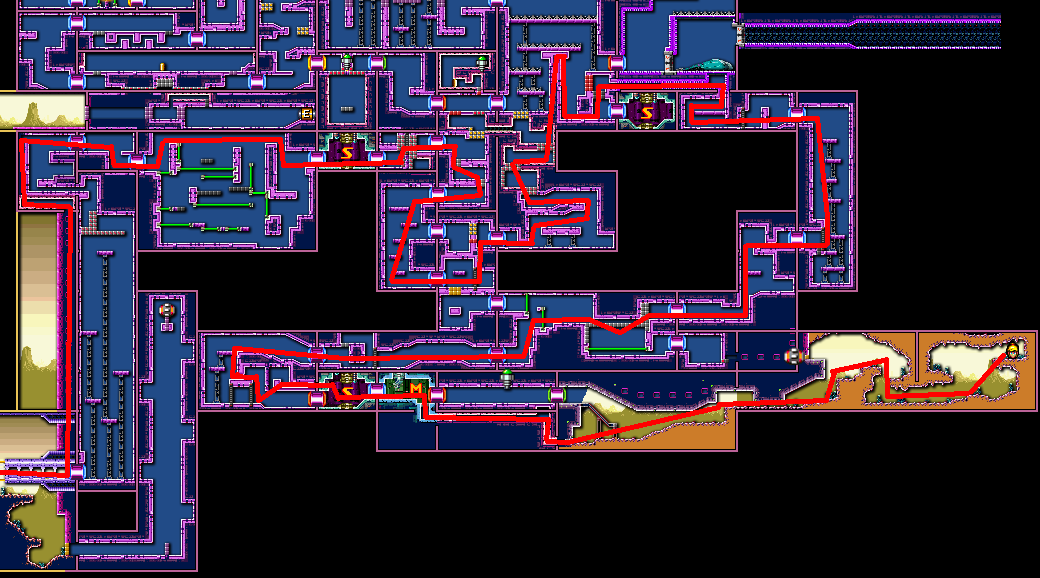 From the start, simply head left. In the room that follows, make your way up using Power Grip or walljumps, then crawl to the left. In the next room, as you're running, shoot diagonally down as you pass through the jagged rocks sticking up from the ground 3 tiles away from the entrance to the next room; if you break both blocks before crawling, you can save a small amount of time. 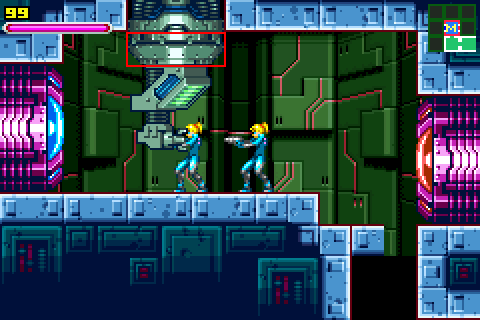 You have a pretty forgiving window in order to not grab the map, the most important detail is to not make a full jump, and you will almost always make it across without grabbing the map. The area enclosed by the rectangle is solid, the rest of the map station is not.

Not grabbing the map saves about 10 seconds, so you'll want to skip it.

Continue to the Save Room on the left. You may heal if you wish, but it comes with a significant time cost.

Be careful not to jump off the save platform too early or you'll bonk your head on the ceiling and have to Power Grip up the ledge on the left. 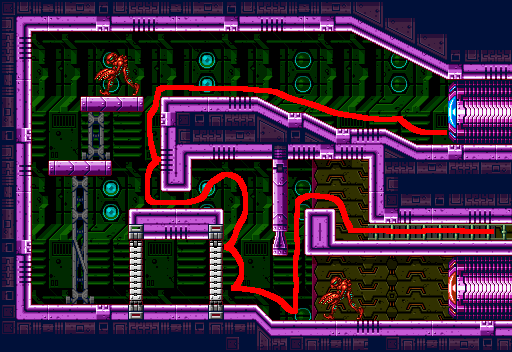 As you fall, freeze the pirate to the right, and run to the left. Walljump twice off the left wall; make sure your second walljump has a lot of height, as it will cause the top-left pirate to appear from the right on the top platform, rather than on the left platform (as shown in the picture).

Next, crawl to the left, and make a careful walljump on the right-hand wall such that you gain enough height to just grip the ledge; next, fire a shot upward as soon as the pirate approaches the edge of the platform to freeze it. If your walljump is too high, the upper pirate will spot you and the alarm will stay on for longer. Once frozen, climb up and continue into the next room.

If done correctly, the gate in the next room will be raised by the time you get to it. If not, you will have to wait by the gate until the alarm turns off. Continue into Tripwire Room.

You have two options in Tripwire room - either proceed through avoiding the tripwires, crawling to the end of the tunnel, shooting the blocks, and making a tight walljump up without hitting the tripwire (Tripwire Skip), or turning the alarm on and running through the room into the next and causing two pirates to kill each other, turning the alarm off (Friendly Fire).

If you're doing Tripwire Skip, simply walljump up the left side of the next room.

If you're doing Friendly Fire, quickly walljump twice on either wall in the next room, and land on the platform to the right. If you did it right, each pirate will prepare to shoot at the same time. Once you see this, jump up to the next platform, and the two pirates will kill each other, causing the alarm to turn off. From there you can proceed into the next room.

Both strats are equivalent in terms of RTA, but the friendly fire strat is easier to pull off. For that reason, it is recommended over tripwire skip.

If you messed up and the alarm is still on in the friendly fire room, simply wait by the door until the alarm turns off. 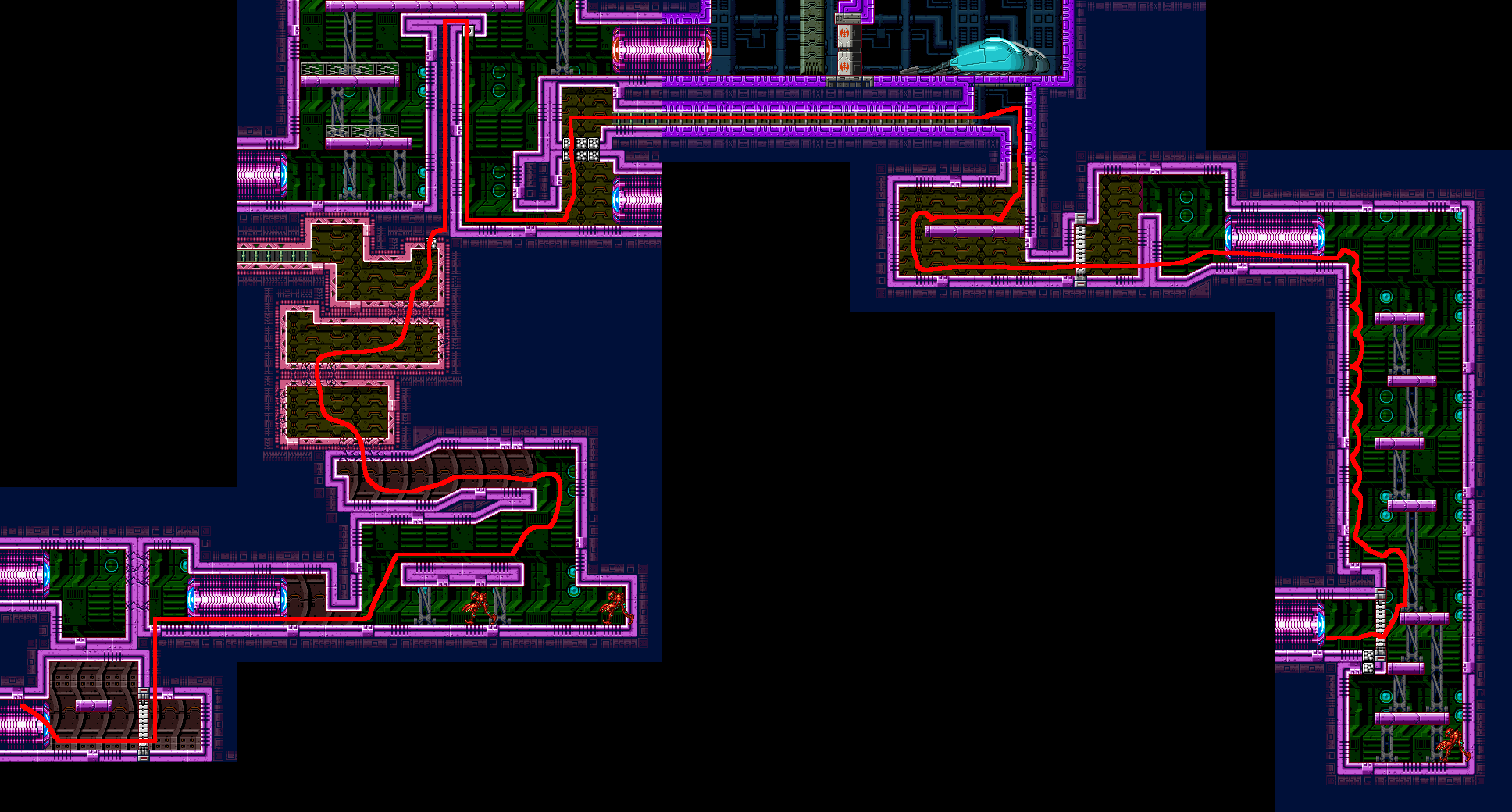 In the next room, simply walljump up the left side of the room, taking care to avoid the crumble blocks on the first platform. Following that, shoot the bomb chain and continue left and up. Make sure you unspin before going through the upward transition so that you can avoid having to grip the ledge.

Crawl left and fall through the crumble blocks and make your way to the left wall. Once there, shoot upward and immediately walljump up so that the shot continues to hit the bomb block at the top (called a "hero shot"). Proceed to the crumble block and shoot the bomb chains below, then do a careful jump from the top to the bottom ledge (using a jump extend if needed) and head left. In the next room, fall to the bottom and make a full jump through the left door to save a couple frames.

This room can be traversed in two major ways: the fast way (Fast Searchlights) and a slower, safer way. Not doing fast searchlights costs about 2 seconds.

Fast searchlights involves some tight platforming and a precise jump so that you can avoid the searchlight's hitbox, which is actually a square and not a circle like the sprite might have you think. Refer to Dragonfangs's tutorial for more detailed information.

If you're spotted by the searchlights or fail fast searchlights (7 second time loss), there is a backup you can do to make the alarm turn off sooner than if you wait in the room with the gate (see video below). You will lose slightly less time this way (~5 seconds).

Head up and around and into Big Tripwire room, jumping through as you enter to fix the door. Take the top route and be careful with your jumps. If you trip the alarm there is a backup you can do.

In the next room simply jump up and head left. In the following room, try to jump late and quickly walljump to the top of the left wall and shoot down as you fall to break a bomb block. Missing this walljump means getting hit (and dying) if the alarm was on when you entered the room.

After falling, head right, fall some more, then head left into Chozodia. 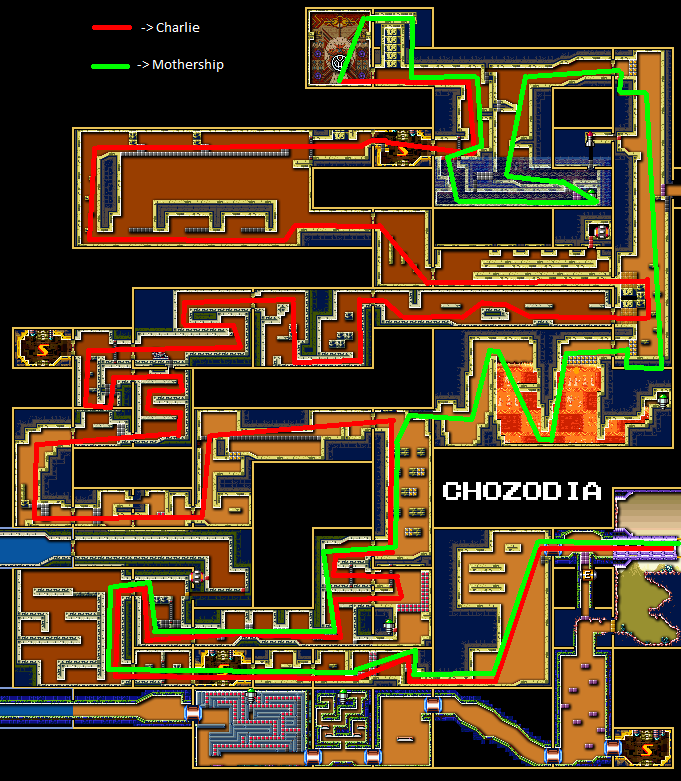 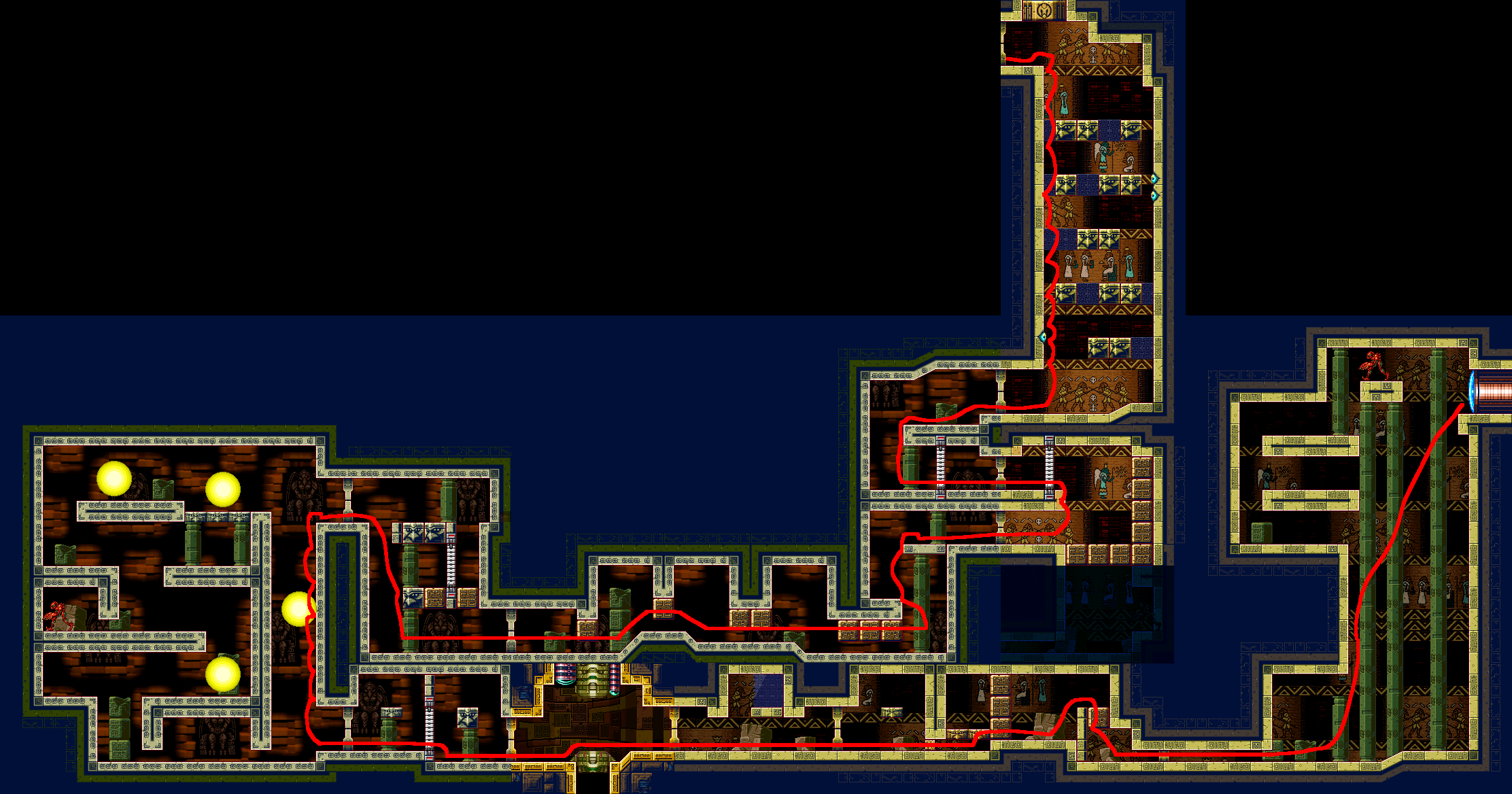 Not a lot to say for the first few rooms of Chozodia. Keep heading left until you get to the big room with the searchlights. Once there, you'll want to jump from the platform by the door up to the right side wall and walljump to the top of the room. You can still make it to the top if you fall to the floor but you'll need to be quick.

There is a small time-saving jump you can do called FUNgineer jump, demonstrated below. 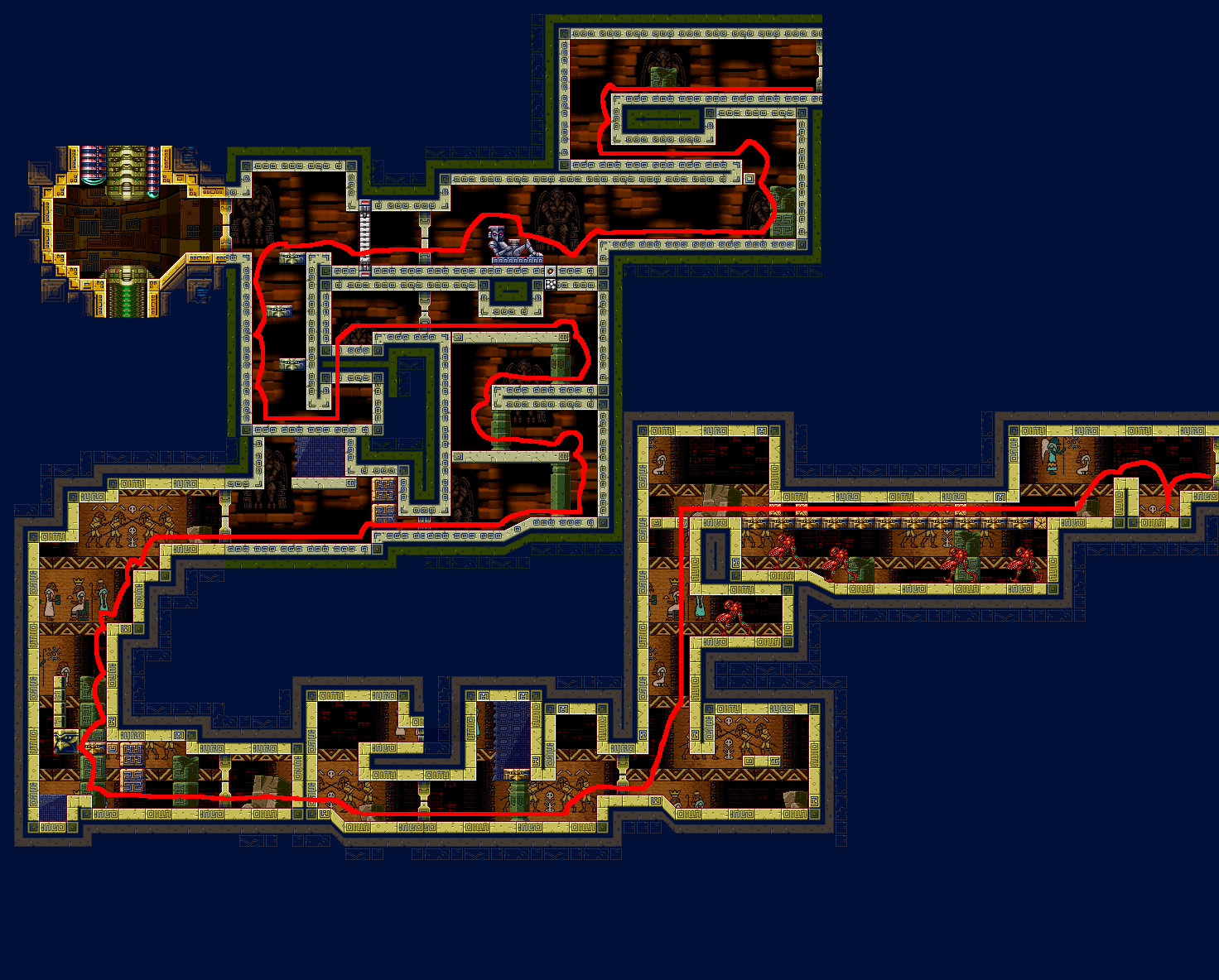 In Sam's Room, there is a strat you can do called Sam Strat which causes the alarm to turn off while you're still in this room. It takes some practice but it's not too difficult. Doing the strat saves half a second; if you tried to get it and missed it, you'll lose more than half a second due to taking a slower path through Sam's Room.

If you're not going for Sam Strat or if you failed you'll need to enter the Save Room a few rooms later in order to turn the alarm off quickly.

Refer to this tutorial by Dragonfangs for more detailed information.

Continue onward until you reach a room with eye tripwire sensors.

It is important that you go through this room fast, lest you get hit by the eye sensor's projectiles (or worse, a pirate). Practice your jumps so you're not gripping the first ledge and make sure your walljumps at the end of this room are fast so as not to get hit.

In addition, you want your walljumps to put you right where you will grip the ledge, similar to the first pirate room, but instead you want to wait for the pirate to jump out of the way. This walljump is also more precise; if you jump too high, you will hit the pirate.

In the next room, shoot a charged shot at the bottom of the ramp, jump over and through the pirate, and fall to the right. Once you see your pistol's gauge flash twice (not once!) fire another shot to freeze the pirate in your way, then continue onwards. 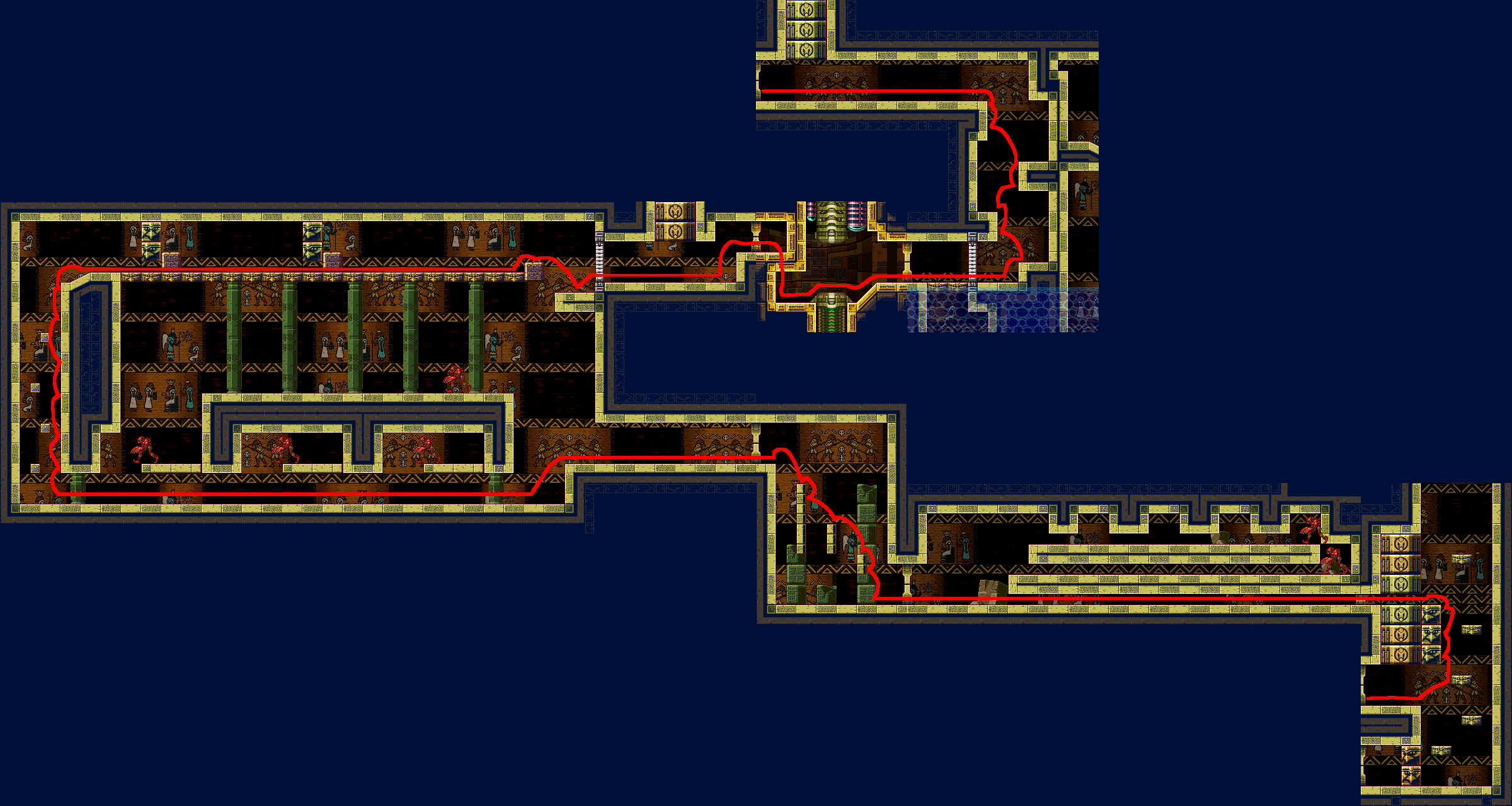 Not a lot to mention here, just basic platforming and walljumps. If you mess up in Big Room, worst case, you die, best case, the alarm stays on a little longer than it should. Be sure to shoot the upper platform on your way off if you made a mistake and the pirates were able to get up there.

Climb through the next room and give your hands a short break before fighting Charlie.

In hero shot room, don't forget to grab the Save Room to the right. And don't bother with Sam Strat; since you need to enter the Save Room afterwards anyway, no sense in wasting time there.

Besides the Save Rooms, only a couple rooms are different in Suitless, notably the very first room, the post-tripwire climb, and Big Room.

You won't be able to grip the ledge unless you're facing left. Falling and jumping back up loses ~1-2 seconds.

The slow strat for Big Room loses about 15-20 seconds, but it is much safer and less precise. Easier for beginners.