Ridley takes 50 regular missiles to kill, or substitute 5 missiles for every super missile you have to use on him.

There is a strat to skip the tiny fireball phase and make ridley immediately fly into the air, and this is done by forcing him to turn around several times at a very precise timing and point in the room. The easiest setup to make this work is to enter the room while morphed and roll far enough right that you get some speed while you roll to the left to start the fight. Keep holding left while Ridley drops on top of you, and try to unmorph while you're in the air during the knockback animation you get from getting hit by ridley. While in midair, you want land to the left and fire a super, turn around after landing and fire another super or two, and if done correctly ridley should look like he's hesitated for a second and then fly into the air. This trick is very precise and takes some playing around with the timing to see what works for you.

This strat also does not immediately save much time by itself. The first benefit to skipping the tiny fireball phase is being able to shoot more missiles at ridley without being interrupted by the damage you're taking in the normal strat, and you also have an opportunity to farm the large fireballs depending on what pattern you get. The next benefit to this strat is you should save a lot more health when the fight is finished, which will make the refill slightly faster later on after killing kraid because you have less health that needs to be refilled.

There is a kind of a dance you will get into with Ridley in order to survive the low% fight with only 5 missiles and no extra energy tanks. During the fight ridley will hover back and forth over the platform, and you want to stay underneath him between his front claw and his tail. As long as you don't jump, this is 100% safe to stay directly below Ridley and he will never hurt you as long as you don't move into his front claw or his tail. 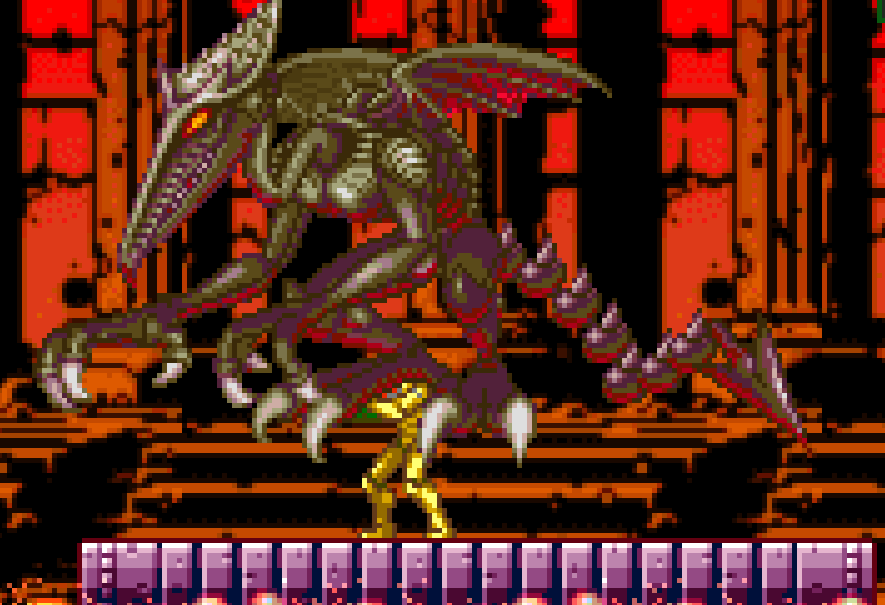 For the fight, you will need to wait for ridley to fire his large fireballs and farm those to refill your missiles. There isn't much else to the fight besides surviving, farming, and shooting when you can.

The only other detail to watch out for in low% is that ridley will go into an enraged phase when he takes 10 missiles worth of damage. You'll know he's enrages when he suddenly fires a burst of fireballs and starts pogo'ing the ground with his tail and chasing after you more aggressively. This 10 missile counters gets reset every time he fires his regular fireballs, so if you're really good with your farming and missile management and manage to fire 8 or 9 missiles into him with more left over, you will want to just wait for another round of fireballs before firing more missiles. This is one of those situations that you don't generally need to worry about until you start getting really good at the fight, so if you're able to enrage ridley in low% then that means you're doing good damage.