In this category your goal is to view every Chozo statue hint. This means you cannot grab any item that is shown to you before you see the hint.

This category is very new and not optimized, but with this preliminary route it shouldn't be too difficult to finish in 20-25 minutes.

There are 7 chozo hints, and the current route views them in this order:

Hi-Jump is grabbed last because it allows us to grab Speed Booster after defeating Kraid, which means we can escape his lair without defeating Acid Worm.

This category requires you to do:

After the first mandatory statue, head straight to Long Beam, view the golden statue before Tourian, then head to the right to view the hint for Bombs.

From there, proceed to grab Missiles and fight Charge Worm, then grab Bombs. After that, make a detour to the Wave Beam hint at the top of Brinstar, like the Early Brinstar route featured in 100%.

Fall back down on the right and head towards Norfair, taking a detour to view the Ice Beam hint.

First thing's first, head to Crateria to grab Power Grip, since there's a barrier in the way that prevents us from heading to the Ice Beam section without it.

After returning to Norfair, head towards Ice Beam. The current route skips Ice Beam, it's uncertain if it's optimal to skip or not, since its potential time saves seem pretty minor.

Next, head up to the Speed Booster hint, then take the Ridley shortcut and view the Varia hint before taking the ball cannon up and out of Norfair. The next stop is Kraid's lair.

No pit stops on the way to Kraid. 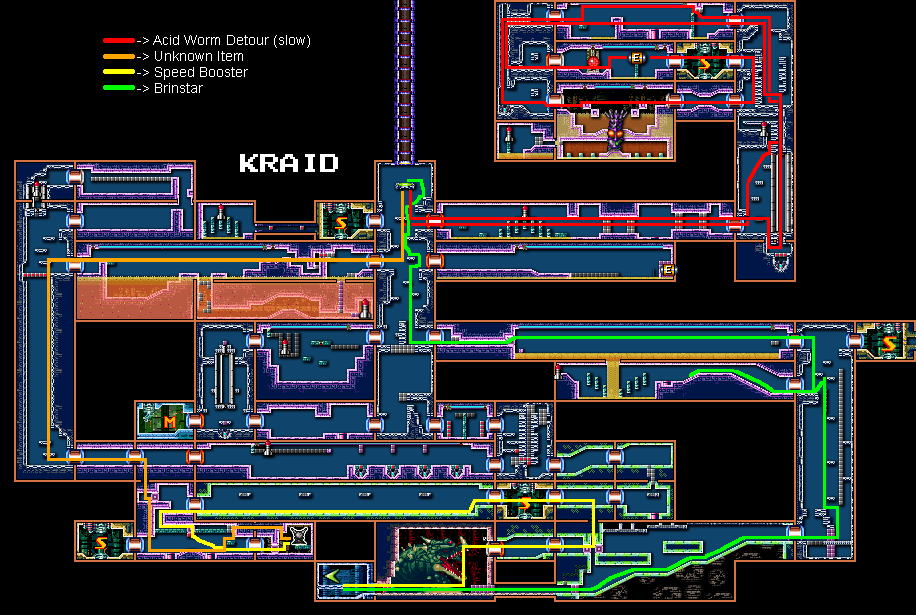 To avoid doing horizontal bomb jumps you can fight Acid Worm, but this detour costs about 100 seconds if done optimally.

Ideally you will head straight to Kraid. After defeating Kraid, grab Speed Booster and use it to cross the acid moat and escape Kraid's lair.

Head to the right after the elevator, view the Hi-Jump hint, and you're done!